To be born a painter is undoubtedly a rare privilege; but to be born an art lover and painting enthusiast is a bigger stroke of luck and – after all – not so rare. Indeed, a painter, as we know, has to deal with lights and colour tubes; with the plane surface of the canvas and the third (if not fourth) dimension; with reality as well as ideas; with both tradition and innovation. The “art lover”, on the other, hand has only to put himself in front of the painting and contemplate it – with admiration … Diego Valeri “Magia della pittura” catalogo VIII premio Michetti 1954

A love and passion predominantly for nineteenth and twentieth century paintings and sculptures, led Valter Benedetti to open Recta Gallery at 140 Via die Coronari in Rome in 2010, with the purpose of offering a dynamic and continually renewing display of paintings and sculptures from Italian and international artists of this period.

The gallery gives great attention to paintings composed in Rome and the surrounding region of Lazio during the 19th century, with particular emphasis on the community of international artists who visited the entire region (from Olevano to Anticoli Corrado and Cervara) during the period of the Grand Tour. This includes the Danish artists Christoffer Wilhelm Eckersberg, Peter Christian Thamsen Skovgaard and Bertel Thorvaldsen and the group of well-known German landscape artists such as Jacob Philipp Hackert and Jonathan Christian Reinhart, and French painters who had been awarded the Prix de Rome.

The great enthusiasm for Rome and the surrounding region also led to the formation of regional and local communities of artists, who have produced fascinating artwork. The most well-known among these group of artists are The Gruppo degli acquarellisti romani (Group of Roman Watercolourists), the society In Arte Libertas, and XXV della Campagna Romana (The 25 of the Roman Countryside).

Recta Gallery also focuses on other Italian regional schools and communities of artists such as:

Continuing with the period of the twentieth century, Recta Gallery is fascinated by avant-gardism and the currents and movements characterising the evolution of European painting and sculpture: Impressionism, Expressionism and Abstractionism, with Symbolists and Fauvists, but also Divisionism, Art Nouveau, Cubism, Decadentism, Futurism, Dadaism, Suprematism, Metaphysics, Magic Realism, Hyperrealism, Pop Art and Surrealism. 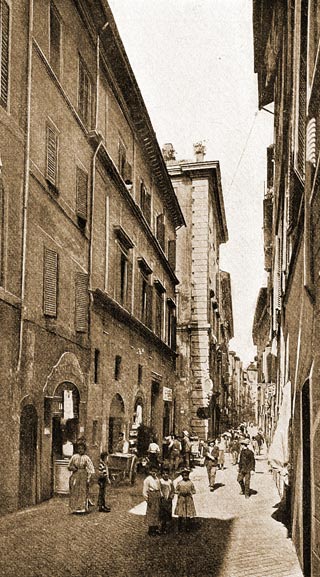 Where does the name ‘Recta’ come from?

‘Recta’ is a tribute to the streets in which the gallery was born. Towards the end of the 1400s, the Via Recta formed a thoroughfare through to St. Peter’s Basilica in the Vatican, passing through the maze of alleyways in the medieval city. The road was built during the medieval reconstruction of the city, commissioned by Pope Sisto IV on the occasion of the Jubilee in 1475. The street allowed pilgrims to comfortably cross the Campo Marzio and reach the Vatican and it therefore became their preferred highway. This meant that in the Via Recta, a flourishing trade of rosary beads, sacred images and particularly crowns grew up, from which the current name Via dei Coronari derives. History has run its course and after time Via dei Coronari has become the premier site for antiques dealers, transforming it into one of the most interesting streets in Rome, both from a historical and architectural point of view.

Recta Gallery searches for catalogues from monographic fairs and exhibitions from 1850 to 1950.

To send us information about artworks that may be of interest to us, you can:

-  Send an email to info@galleriarecta.it with your contact details, the description of the painting/sculpture, the dimensions, and any related information you may have, attaching the image of the artwork;

-  Send a picture, as well as the related details and information, along with your contact details via whatsapp to Stefania Diamanti, +39 320 4190 525

-  Complete the form which can be found below.